Together, we can change
the fate of animals
kept on farms

Open Cages is a British animal advocacy organisation with the charity registration number 1190484. We were created to oppose the suffering and exploitation of farmed animals.

We were established in Britain as part of Anima International, a new coalition of European animal protection organisations. Since its beginnings in 2018, Open Cages has published 12 investigations revealing the conditions of animals raised for food and clothing. These videos have revealed the routine practices and abuses of industries that consider and treat animals as objects.

Open Cages aims to change the way our society views these animals and fight their continued suffering. Through its actions, Open Cages strives to end factory farming and encourage a transition to non-animal food sources.

Factory farming is the biggest man-made cause of animal suffering in the world. Each year, more than 1,000 billion land and water animals are killed around the world for the production of meat, milk, eggs and fish. In Britain alone, more than 1 billion chickens are raised for meat every year. 95% of them are kept in intensive farms where suffering and misery is the norm. And yet, facts like these are deliberately kept out of sight and out of mind.

Open Cages’ mission is to speak up on behalf of these animals, to push for an end to factory farming, and to create a world free from animal suffering.

1. Question the use and abuse of farmed animals 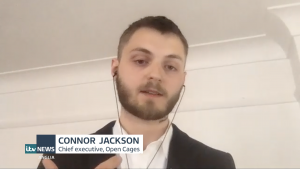 2. Campaign to stop cruel practices at the highest levels of business and Government 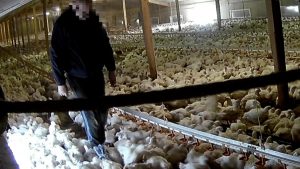 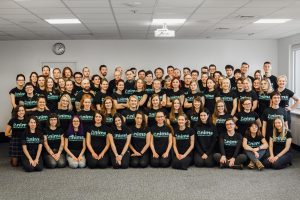 OUR HISTORY AND SUCCESSES

In 2018, our CEO & Co-founder Connor Jackson launched Open Cages as the UK branch of a coalition of European animal protection organisations. As a filmmaker, Connor established the charity to fight the exploitation of farmed animals through undercover investigations and high profile media campaigns.

Since its inception, Open Cages has published 12 high profile undercover investigations into the conditions of animals raised for food and clothing. Most notably, thanks to the work of its investigators, the organisation has shown the dark reality of 11 separate FrankenChicken farms where Britain’s cheap supermarket chicken is produced. Open Cages is also supported by dedicated public figures who have presented the investigations and campaigns, including: Chris Packham, Joanna Lumley, Peter Egan and Lucy Watson.

The in depth, hard hitting nature of Open Cages’ investigations have allowed their dissemination all across mainstream media, raising public awareness of the suffering endured by animals and helping to make the cause unavoidable in the public conversation. 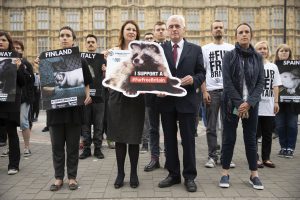 In 2018 still as a University student, Connor travelled to Poland to witness and film the suffering of foxes on barren, intensive fur farms. The footage resulted in his award winning documentary Klatki: The Hidden Farms of Europe, released as part of the ongoing #FurFreeBritain campaign for Britain to ban the sale of fur. Open Cages has published several high profile investigations into European fur farms, secured the support of dozens of MPs alongside other animal protection organisations, helped reach one million petition signatures and has coordinated protests attended by hundreds of activists.

The British Government is currently considering a ban on the sale of fur. Sign the petition! 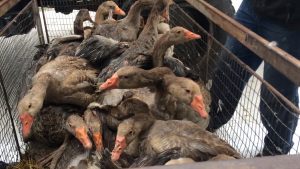 Following an investigation into the Ukrainian foie gras industry, Open Cages convinced a dozen high profile British restaurants to remove foie gras from their menus and helped influence the last foie gras farm in Ukraine to shut down for good. Most notably, celebrated restaurateur James Thomson OBE agreed to remove the dish after dialogue with Open Cages, publicly stating “I would strongly encourage any restaurateur or chef who is serving foie gras to read about the Foie Gras Farms in Ukraine and across Europe and to remove it from their menu.”

The British Government is currently considering a ban on the import of foie gras. Sign the petition!

Stopping the sale of FrankenChicken 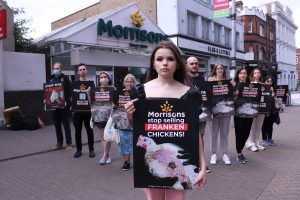 Since 2019, Open Cages has focused its efforts primarily on stopping the sale of FrankenChicken: the cruel secret behind cheap chicken. It has been called the “biggest animal welfare issue in Britain.”

In a couple years, Open Cages has gathered footage from over a dozen British chicken farms revealing the miserable lives of FrankenChickens. Open Cages’ investigations and relentless presence in the media have gained some of the most high profile coverage for FrankenChickens ever in Britain, such as influencing a statement from The Times calling for fairness and transparency in the chicken industry; a partnership with Chris Packham who launched his own petition and has appeared on platforms like Sky News sharing our investigation images; and influencing and working with brave advocates like Morrisons employee Doug Maw to lead nationwide protests calling on Morrisons to stop the sale of FrankenChicken. 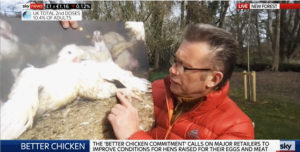 Open Cages’ campaign, in collaboration with its friends in The Humane League UK and Animal Equality UK, has helped to influence hundreds of major companies such as Subway, M&S and KFC to pledge to stop the sale of FrankenChicken: some of the most significant commitments to animal welfare in history.

Sign the petition to stop the sale of FrankenChicken!

Through filmed investigations, Open Cages reveals the conditions of animals raised for food and clothing. The charity’s first duty is to show the public what happens behind closed doors by collecting unequivocal evidence.

Inform
Open Cages feeds the public debate and question our society’s view of animals. Our investigations and expertise allow us to keep the issues regularly visible in the media, reaching millions of people.

Mobilise
The organisation launches petitions that it brings to public authorities or companies. On social networks or via its newsletter, Open Cages provides advocates with the knowledge and tools to effectively demand change.

Thanks to a dedicated network of activists across Britain, Open Cages organises awareness-raising actions in the street, informs consumers and provides opportunities for all to stand against farmed animal cruelty.

Open Cages encourages businesses and industry stakeholders to eliminate cruel practices in their policies through meetings and by providing expert information. But the organisation also launches public campaigns calling out those companies that refuse to make progress for animals, to convince them to change.

Open Cages works with elected officials to introduce policies that better protect animals or ban cruel practices in law. The organisation provides evidence and information to help inform policy, hold events and partners with animal-friendly politicians to call for legislative change in the public arena.

Stay up-to-date with us and join 403 people who care about animals in the farming industry.

That's it… almost! You just need to confirm your email address. Click on the confirmation link we've sent you.

We are happy that you are visiting our website and thank you for your interest in helping animals. According to law, we are obliged to inform you that we may be processing your personal data using cookies. Cookies are stored on your device while you are using our website or services. As a non-governmental organisation, we prioritise protecting your privacy. We apologise for any inconvenience this may cause!

Don't worry! Many cookies are anonymised - without additional information and it is not possible to identify your identity on that basis

You can withdraw your consent to the use of cookies at any time - to do this, change the settings in your web browser - you can completely block the automatic handling of cookies or request notification whenever cookies are stored on your device. Settings can be changed at any time

If you have questions or concerns regarding the processing and protection of your personal data, please contact us at https://opencages.org/privacy-policy

We believe that your visit to our website is an expression of your interest in the activities of Open Cages and care for animal rights.

We are happy that you are with us and we hope that together we will fight for a better world for animals.

My browser is set according to my preferences.