Here at Open Cages, we believe that there is no other story that inspires such hope and optimism than the rescue of Maciek the artic fox.

Open Cages is running a fundraiser for the end of the fur industry across December. You can donate and help foxes like Maciek by clicking here 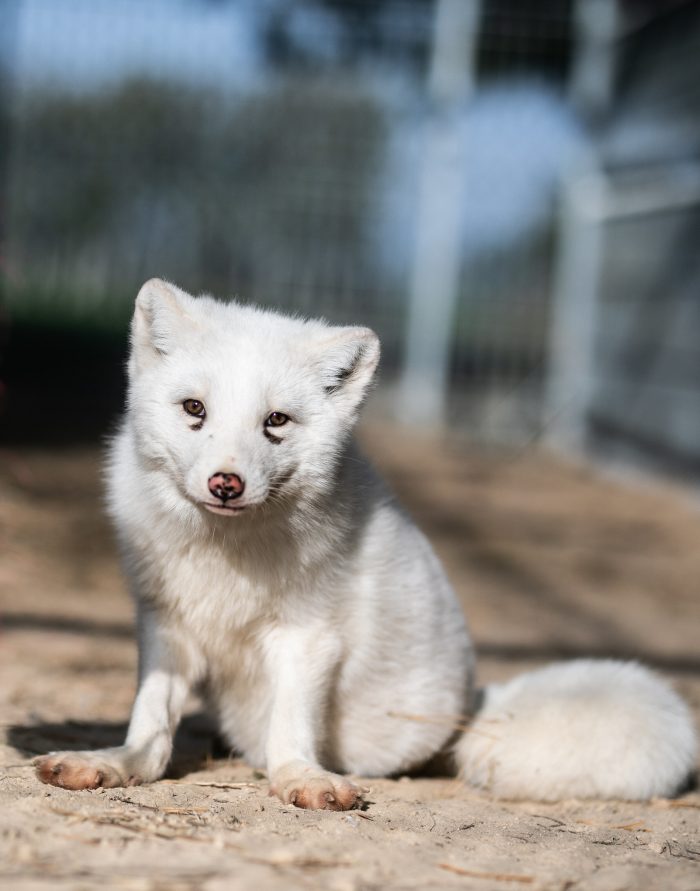 All photos by Andrew Skowron.

Maciek’s story began quite differently from the healthy and happy photo we see of him here. Maciek grew up on a Polish fur farm where his only surroundings were his dirty cramped cage and other foxes living in misery.

He was found frightened and in pain, merely existing instead of living. Each day he suffered from bruising and injuries inflicted on him by the rusty metal bars in his tiny cage. He was completely isolated, left to die in his cage like all the other foxes trapped there. 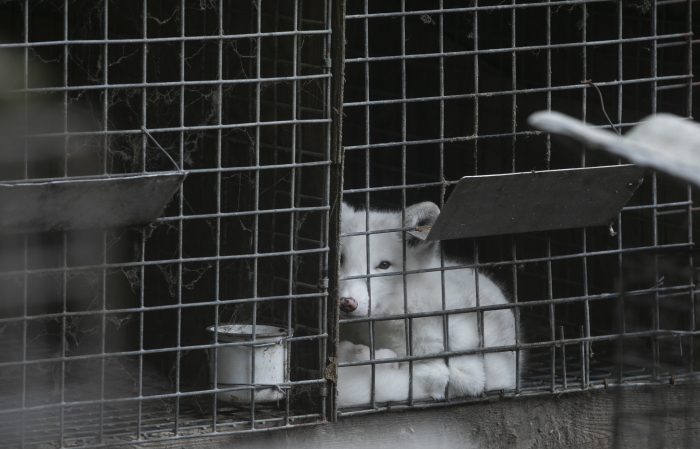 However, help was at hand. A year ago, Open Cages activists investigated the fur farm after reports of cruelty. They managed to rescue Maciek from the nightmare of his cage, the only place he’d ever known.

They took him to a vet as his health was deteriorating. Maciek was given urgent medical treatment, most significantly his paw had to be amputated due to rot in his leg from the filthy conditions he was surviving in. Maciek braved the visit to the vets and his life rapidly changed forever. 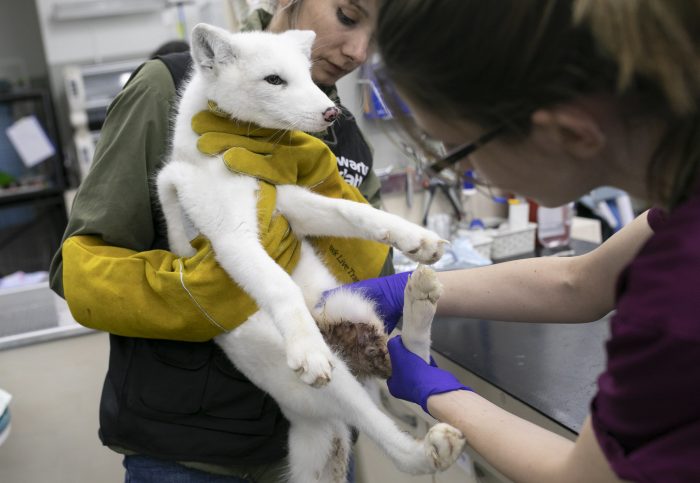 Ever since his rescue and his vet visit, Maciek has been absolutely thriving in his new home. Safe from the fur industry, Maciek has the freedom to live without fear and all of the space to run and play despite an amputated paw!

Imagine not being able to run due to being trapped in a cage for your entire existence and then suddenly you have the freedom to run around to your hearts content. To bask in the sun and feel the cool breeze against your skin. Maciek felt this wonderful moment of liberation when he arrived at his new home and he’s been able to feel it ever since. And that’s exactly how it should be. 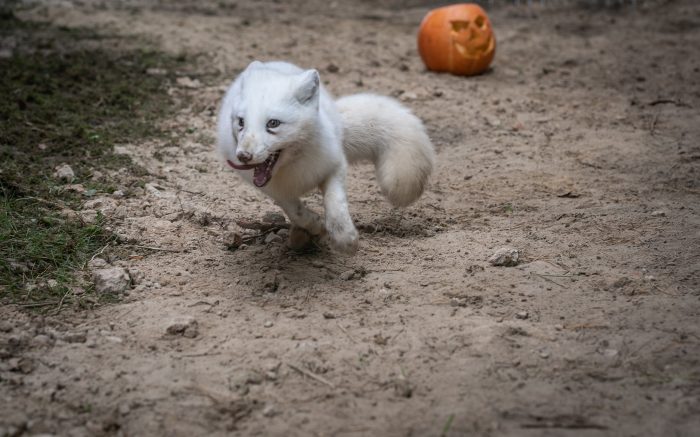 Once completely alone, Maciek now has a new friend. Klara is a friendly dog that keeps Maciek company and joins him in his new adventures. The two are simply inseparable and have formed a beautiful bond. 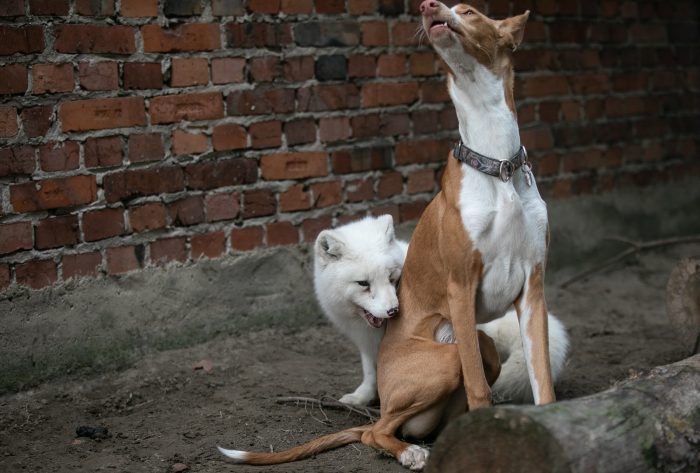 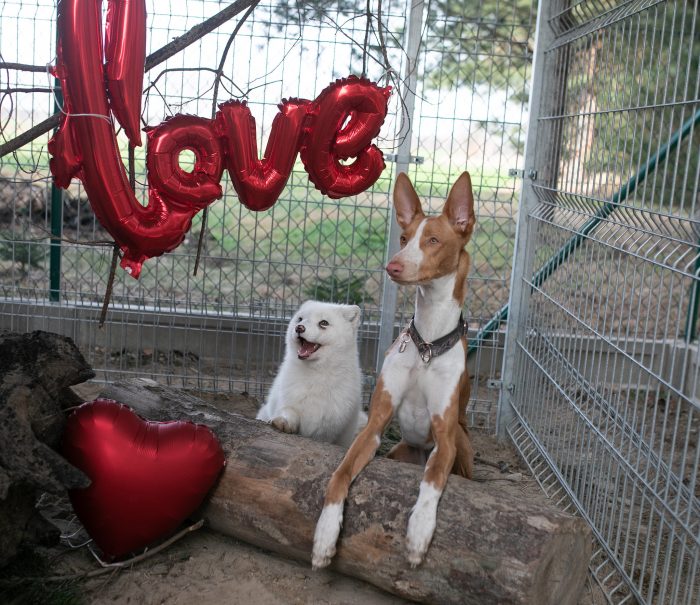 As well as spending time with Klara, Maciek loves playing with his toys with one being his absolute favourite, much like our typical canine companions. Beforehand, Maciek had no idea how to play as that opportunity was cruelly taken away from him. Now he plays with his toys every day and the positive difference to his happiness and wellbeing is undeniable. 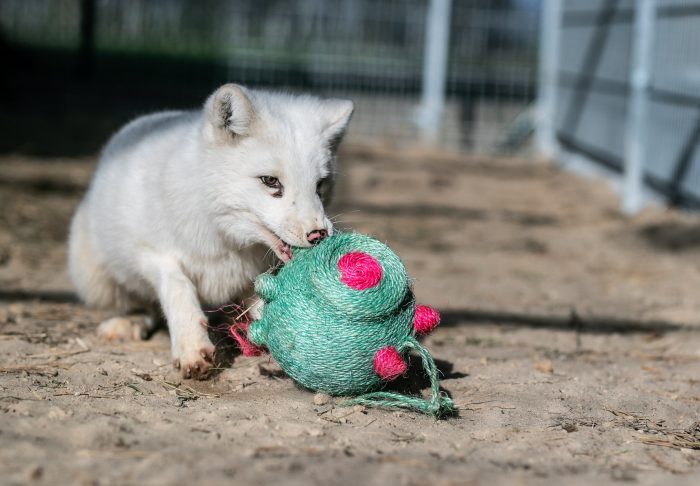 In many fur farms, foxes are severely underweight and starve to death. With Maciek’s new lease of life and renewed health, he quickly began to try foods that were previously impossible to eat and full of amazing nutrients.

One of Maciek’s favourite foods is pumpkins, not only to eat but to pose with on Halloween too! 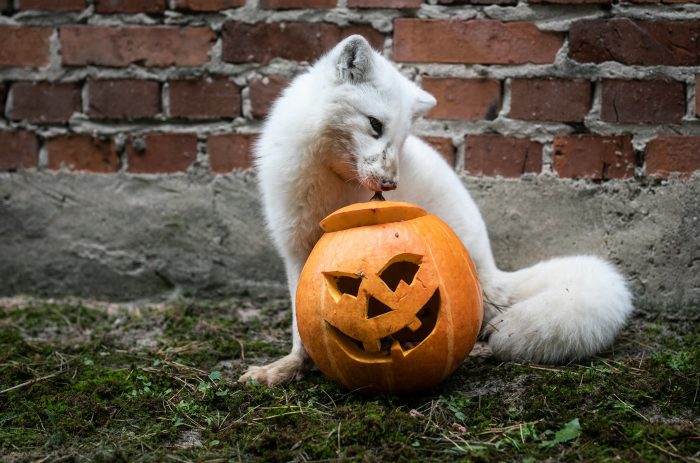 Life in his new home has meant that Maciek has been able to celebrate the holidays that we all know and love. 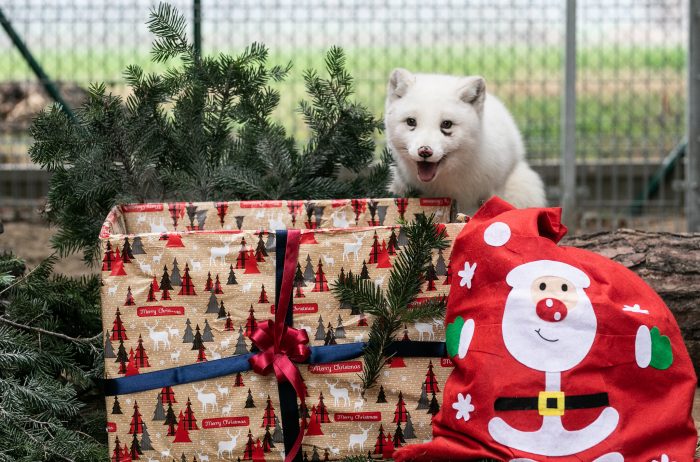 Arguably the greatest gift for Maciek is his freedom and safety from the barbaric fur industry.  Each day he is cared for and loved whilst having the ability to express his natural behaviours such as running, playing and interacting with other animals. Every fox deserves to experience this life of liberation and for that to happen, fur farming needs to end.

Across December, Open Cages are fundraising to put an end to an inhumane industry that is recently looking on the brink of collapse. We’re at a crucial point in time where more people are questioning the safety of these farms, both for the animals and for humans, with fears of coronavirus spreading and mutating further.

For foxes like Maciek, hope seems to be on the horizon as there’s a strong possibility of a future fur ban in Poland.

However, Poland is still waiting for the final law to be passed – action needs to be taken now to ensure that the momentum for change doesn’t stagnate.

Be a hero for fur farm victims this Christmas by donating to our fundraiser here. Every donation counts, no matter how big or small. If you’re unable to donate, please share the fundraiser with your family and friends.

We’re so grateful for your continuous support and dedication to helping animals in need.

Let’s put a final end to the fur industry together.

Stay up-to-date with us and join 403 people who care about animals in the farming industry.

That's it… almost! You just need to confirm your email address. Click on the confirmation link we've sent you.

We are happy that you are visiting our website and thank you for your interest in helping animals. According to law, we are obliged to inform you that we may be processing your personal data using cookies. Cookies are stored on your device while you are using our website or services. As a non-governmental organisation, we prioritise protecting your privacy. We apologise for any inconvenience this may cause!

Don't worry! Many cookies are anonymised - without additional information and it is not possible to identify your identity on that basis

You can withdraw your consent to the use of cookies at any time - to do this, change the settings in your web browser - you can completely block the automatic handling of cookies or request notification whenever cookies are stored on your device. Settings can be changed at any time

If you have questions or concerns regarding the processing and protection of your personal data, please contact us at https://opencages.org/privacy-policy

We believe that your visit to our website is an expression of your interest in the activities of Open Cages and care for animal rights.

We are happy that you are with us and we hope that together we will fight for a better world for animals.

My browser is set according to my preferences.